Refugees on Nauru have issued a desperate plea for help, saying they are just days away from running out of food.

The tiny island nation recorded its first two COVID-19 cases on March 31 on a passenger flight. Case numbers have since ballooned, with 861 recorded on Thursday – up from 337 reported on Sunday.

One refugee said the local bank had closed in response to the outbreak and people detained in the regional processing centre had no access to money or transport to the supermarket to buy food.

“It will be two or three days before we run out of everything,” he said. “We don’t have transport to get medications and food. We don’t have money.”

He said refugees and asylum seekers were scared to leave the centre.

Another said Canstruct, which runs case management and resettlement services for refugees and asylum seekers on Nauru, had paused a bus service to a local supermarket amid the outbreak, leaving people with no way to buy supplies.

“No medication, nothing. Only my room, inside,” he said.

This masthead sought comment from Canstruct, the Australian Border Force, and the Department of Home Affairs and the Department of Foreign Affairs and Trade. Home Affairs spokesman was unable to confirm reports of food shortages, what local assistance would be offered to asylum seekers and refugees amid the COVID-19 outbreak, or whether Australia would step in and offer assistance.

Brisbane-based Canstruct has been contracted to run services at Nauru’s regional processing centre since 2012 and is contracted to continue doing so until at least June.

The Guardian reported in February that the holding company behind Canstruct made $101 million in profit last financial year and that it costs Australian taxpayers nearly $12,000 a day to detain a single refugee or asylum seeker in Nauru.

Last year, The Age and Herald revealed Canstruct made at least 11 political donations to the Coalition in the previous three years.

For 19,000 people, this election could open the door to life

A decade after the regional processing centre reopened on the small Pacific island, 112 refugees and asylum seekers remain stranded there. Some are awaiting resettlement in the United States and Canada, while others have no clear path to resettlement.

Nauru government information officer Kelly Amram said on Tuesday that COVID-19 protocols were in place to try to slow the spread of the virus.

“We are advised to stay at home, we are not in lockdown. Only essential workers can work,” Amram said. “We may go out to buy things if we need for the house, but we are asked to wear a mask when we leave the house.”

“Cases are almost doubling every two days,” he said. “Approximately one in five people tested are positive.

“We will eventually have to live with the virus as other countries have, but in the meantime we must follow our health protocols and maintain the rules in place of hand-washing, wear masks, sanitise, avoid close contacts, and minimise movements.”

He said 110 Nauru homes were under isolation orders on Thursday, up from 75 on Wednesday. Nauruan citizens in isolation are receiving boxes of water and noodles from the local government. By Friday, there would also be boxes of eggs donated by Taiwan. 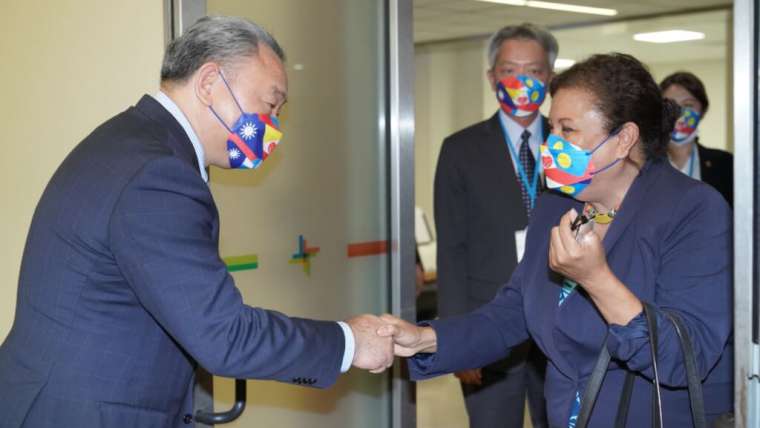